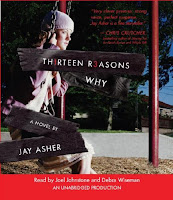 Clay Jensen's first love records her last words.
Clay Jensen returns home from school to find a strange package with his name on it lying on his porch. Inside he discovers several cassette tapes recorded by Hannah Baker,his classmate and crush, who committed suicide two weeks earlier. Hannah's voice explains that there are thirteen reasons she decided to end her life. Clay is one of them. If he listens, he'll find out why.
Clay spends the night crisscrossing his town with Hannah as his guide. He becomes a first-hand witness to Hannah's pain, and learns the truth about himself, a truth he never wanted to face.
Through Hannah and Clay's dual narratives, debut author Jay Asher weaves an intricate and heart-rending story of confusion and desperation that will deeply affect teen readers.
When I picked up this audiobook from the library I knew it was a young adult book about suicide, but I didn't know that the format of the story included cassette tapes. Because the story revolves around these tapes of Hannah's, it makes for a very powerful audio book. You are hearing Hannah's words through the speakers, just as Clay would.
There was both a male and female narrator on the audio, and they both were very well done. The emotion of the story came through strongly, and throughout the story I would get goose bumps.
Sometimes as Clay was listening to Hannah's tapes his thoughts and reactions to her statements would break into her narrative. While these often clarified or added to the story they were also a little distracting. I would be so engrossed in Hannah's story that I didn't want any interruptions.
This is a powerful and well-written story. It is definitely not just for teens, as suicide is a subject that doesn't just affect them. I highly recommend this book, especially the unabridged audio version. This is a story that will stay with me. 5 stars
Order Thirteen Reasons Why

I remember reading this review on Maw Books. Books like this totally freak me out, having two kids on the brink of adolescence. I want to run away with my hands over my ears screaming "no, no, no". But I think we owe it to ourselves and our kids to really understand why and how things like this happen. And audio, especially with multiple narrators which is so very effective, can especially get into your head. Thanks for the review!

I really, really, want to read this book!! I've been hearing about it everywhere and it sound so good!!

I got this from the library when it first came out but didn't get a chance to read it. I recently grabbed it from there again and started reading it last night. It really gets you from the start. In fact, I have to go read some more now. :) That's a good idea about the audio tapes. I bet it would add so much to the story.

It's taking me forever to get to this one! It's on my shelf. Reviews like yours makes me want to bump it to the top!

Sandy and Ann: Definitely pick it up. It's a tough subject, but is really well done.

Wrighty: I'll check out your review when you get it up!

I was just floating around your blog and wanted to read this review again because I finally finished the book. I did think it was powerful but the more reviews I read the more I think the audio version may be the better choice, at least for me. I haven't listened to it yet but I think I will sometime. The thing I had the most problem with was the constant change from Hannah's voice to Clay's thoughts. That seems to be handled well with the audio version. Good to know!