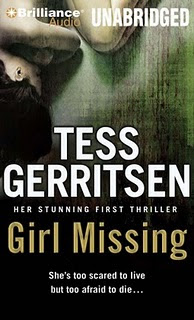 THE FIRST BODY IS A MYSTERY.

She's young. She's beautiful. And her corpse, laid out in the office of Boston medical examiner Kat Novak, betrays no secrets -- except for a matchbook clutched in one stiff hand, seven numbers scrawled inside.

THE NEXT BODY IS A WARNING.
When a second victim is discovered, Kat begins to fear that a serial killer is stalking the streets. The police are sceptical. The mayor won't listen. And Kat's chief suspect is one of the town's most prominent citizens.

THE FINAL BODY . . . MIGHT BE HERS.
With the death toll rising, Kat races to expose a deadly predator who is closer than she ever dreamt. And every move she makes could be her very last.

The very first thing you need to know about this book is that it is a re-issue.  It was originally released in 1994 as Peggy Sue Got Murdered.  I listened the audio version, and it included an introduction explaining that Gerritsen sees this novel as her first book that blended romance with crime writing.  The introduction also mentioned that the book was updated for the re-issue.  I'm not quite sure what that means, but maybe the addition of cell phones...

I've been reading Gerritsen's books for years, and this is the first one I've been a little disappointed with.  If I'd realized it was a re-issue, and romantic suspense before I started listening, I probably would have skipped it.  It wasn't terrible, but I really prefer Gerritsen's grittier Rizzoli and Isles series.

My biggest complaint with the book is that some of the character's actions were unbelievable, and this kept distracting me from the story.  For example, at one point Kat, the medical examiner, is talking to a person of interest in the case.  He starts asking some questions about another body in the morgue, and she pulls out the file and tells him all of the findings on that case.

It's been a few months since I listened to this one, so I don't really have any specific comments on the narrator.  While I didn't find anything about her delivery particularly memorable, I also don't really have any complaints.  If you like romantic suspense, Girl Missing is decent, but if you prefer series books, or more mystery and less romance, try the Rizzoli and Isles series.  2.5 stars, ok+
Posted by Melissa at 4:36 PM 5 comments 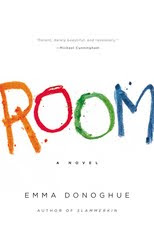 by Emma Donoghue
Author Extras: Website, Facebook,
Interactive Room Site
Publisher: Hachette Book Group
Source: Publisher for Review
Rating: 4.5/5
Summary from the Publisher:
Room is home to Jack, but to Ma, it is the prison where Old Nick has held her captive for seven years. Through determination, ingenuity, and fierce motherly love, Ma has created a life for Jack. But she knows it's not enough...not for her or for him. She devises a bold escape plan, one that relies on her young son's bravery and a lot of luck. What she does not realize is just how unprepared she is for the plan to actually work.
Review:
It's been a while since I've read a book that I've felt was truly original, but Room is unlike anything I have ever read before.  There were a couple of instances where I thought the plot was a little weak, but in order to move the story forward, I think this was necessary.  This didn't impact my overall enjoyment of the book, but was a little distracting to me at the time.
Room is told completely from Jack's point of view.  His five-year-old voice took me a little while to get used to, but once I did, I loved it.  Through Jack's eyes I could easily see how confusing the world could be.  His Ma did a wonderful job of explaining things to him, but some things just need to be seen and experienced to be fully understood.
I was completely invested in Room while I was reading, but it's one of those books I can't stop thinking about now that it's over.  The story was left open ended, not in an unfinished way, but rather it left me wanting more. Room has been shortlisted for the Man Booker Prize.  4.5 stars, very good+
Posted by Melissa at 4:34 PM 9 comments

Review: Leaving Before It's Over by Jean Reynolds Page

Book Info:
Leaving Before It's Over

When Roy Vines married his wife, Rosalind, he traded his family and his inheritance for love—a painful choice that has blessed them with years of joy nestled in rural North Carolina with their beautiful daughters, sixteen-year-old Lola and little Janie Ray.

But their happiness is threatened when Rosalind suddenly falls ill. Desperate to get her the help she needs, Roy does the one thing he swore he'd never do—turn to his heartless and bitter identical twin brother, Mont, for help.

This is the third book I've read by Jean Reynolds Page, and I like each one even more than the last.  This last one has convinced me that, without a doubt, that I need to read the last two books in her backlist.

Page's characters are so very vivid.  Even if they are people I wouldn't normally hang out with, I couldn't help but be drawn to them. Roy is a solid and likeable man.  Lola and Luke are typical kids.  They may make mistakes, but are ultimately good kids, and I couldn't help but wish them the best.  The Vines family, as a whole is stand-offish and cold, but they are still characters that most people can understand. I loved how I could see the situation from many different perspectives and that

I also love the family dynamics in this book. I think a slightly dysfunctional family is something that everyone relates to on some level, and that gives the story a very accessible quality.  If characters and families are too perfect they are hard to swallow, but the Vines family isn't that way at all.  There are those in the family that are easy to dislike, and those who I changed my mind about by the end of the book. In so many books either the plot or the characters stand out, and in Page's books they are both able to hold their own equally.  4.5 stars, very good +
About Jean Reynolds Page

Jean Reynolds Page is the author of The Last Summer of Her Other Life, The Space Between Before and After, A Blessed Event, and Accidental Happiness. She grew up in North Carolina and graduated with a degree in journalism from the University of North Carolina at Chapel Hill. She was a dance critic for more than ten years before turning full-time to fiction in 2001. In addition to North Carolina, she has lived in New York, Boston, Dallas, and Seattle. She and her family recently moved to Madison, Wisconsin.