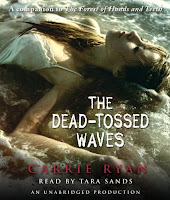 Gabry lives a quiet life. As safe a life as is possible in a town trapped between a forest and the ocean, in a world teeming with the dead, who constantly hunger for those still living. She's content on her side of the Barrier, happy to let her friends dream of the Dark City up the coast while she watches from the top of her lighthouse. But there are threats the Barrier cannot hold back. Threats like the secrets Gabry's mother thought she left behind when she escaped from the Sisterhood and the Forest of Hands and Teeth. Like the cult of religious zealots who worship the dead. Like the stranger from the forest who seems to know Gabry. And suddenly, everything is changing. One reckless moment, and half of Gabry's generation is dead, the other half imprisoned. Now Gabry only knows one thing: she must face the forest of her mother's past in order to save herself and the one she loves.


The Dead-Tossed Waves is the second book in a trilogy, following The Forest of Hands and Teeth (review).  These types of books are a bit of a departure for me.  I don't usually read books that involve dead things like zombies, and I listened to the first book based on Beth's rave review.  I enjoyed The Forest of Hands and Teeth, but liked the audio production more than I liked the story itself.  Still, I was interested enough to listen to the second book, and I enjoyed The Dead-Tossed Waves much more.

I think the difference between Forest and Waves, for me, was how prominent the Unconsecrated were in the story.  In Forest, they were front and center all the time, and since the walking dead don't appeal much to me I didn't enjoy the story as much.  In Waves, the Unconsecrated are still a very important part of the story, but the setting and other characters allowed them to blend into the background a bit and I found myself much more interested in the story.  I also felt  more of a connection to Gabry's character than to Mary's.  I'm not sure exactly why this was, but it was one more reason Waves worked better for me.

A different narrator read The Dead-Tossed Waves, and I don't think it was quite as good as the first book in the trilogy, but it was close.  While I didn't expect to be pulled into this series like I have been, I am now very excited for the last book in the trilogy.  I will be listening to it as soon as it becomes available.  4 stars
Posted by Melissa at 9:54 PM 5 comments

Book Info:
Bright Lights, Big Ass: A Self-Indulgent, Surly, Ex-Sorority Girl's Guide to Why it Often Sucks in the City, or Who are These Idiots and Why Do They All Live Next Door to Me?

by Jen Lancaster
Paperback: 400 pages
Publisher: NAL Trade; (May 1, 2007)
ISBN-13: 9780451221254
Genre: Non-Fiction
Source: My Shelves
Rating:4/5
Jen Lancaster hates to burst your happy little bubble, but life in the big city isn't all it's cracked up to be. Contrary to what you see on TV and in the movies, most urbanites aren't party-hopping in slinky dresses and strappy stilettos. But lucky for us, Lancaster knows how to make the life of the lower crust mercilessly funny and infinitely entertaining.


Picking a book right before your baby has open heart surgery is a tough thing.  I didn't want anything too serious, or with too complex a plot.  I also wanted something I could set aside and not lose my place in the story, and really wanted something to lighten my mood.  Jen Lancaster was the perfect choice.

Lancaster has the same sarcastic, biting sense of humor that she did in Bitter is the New Black, and she often had me laughing out loud.  She is not at all politically correct, and while she favors a word I hate, I am a little more forgiving considering it was likely she would use it, and I read the book anyways.  I love that Lancaster is able to laugh at herself, and I she made me wonder why I waited so long to read another one of her books.  4 stars
Posted by Melissa at 8:23 PM 5 comments