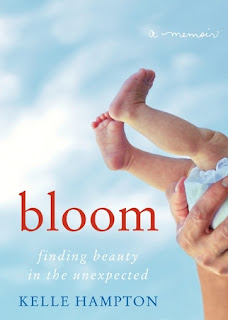 A few weeks after Claire was born a birth story starting showing up on the internet.  It was the beautiful story of a birth, followed by the unexpected news that the baby had Down syndrome.  We were nearly certain Claire had Down syndrome so the news wasn't a shock to us like it was for the Hampton's, but the raw emotion in the post resonated with me, and I couldn't help but cry when I read it.  Even now, nearly three years later, my eyes prick with tears when I reread the post.

This birth story was my introduction to Kelle Hampton and her blog, Enjoying the Small Things.  Kelle had been blogging long before Nella's arrival, but that birth story introduced her blog to a whole new set of fans.  Because our girls were nearly the same age, and because Kelle seemed to be *the* Down syndrome blogger to keep up with, I started following along.

After reading her blog for a while I discovered Kelle and I are so very different.  Her world is (seemingly) filled with perfectly dressed kids, extravagant parties, beautifully staged photos and I often left her blog feeling a bit defeated.  She seemed to have it all together, and I was lucky to have time to do the dishes and take a shower.

Because I felt so far removed from her way of life I didn't read her memoir, Bloom, for quite a while. (I actually had to check it out from the library three times.  It kept expiring because I never made time to read it, even though it is a fast read.)  If you've read Kelle's blog, expect more of the same from her book.  If you are new to her...there are stories about her amazing group of friends and all their crazy times together, beer handed out liberally, and lots of dudes, bad asses and hot messes.

My main criticism of the book is that it's not particularly well written.  There are quite a few times I had to remind myself that this was a grown women, a mother, telling her story and not a high school student.  Parts of the book were incredibly juvenile, as if Kelle was mainly concerned about still being the cool kid, even though she now has this not quite perfect daughter.  I wanted the raw emotion that came through in Nella's birth story, and I just didn't have the same connection to Bloom.

Where Bloom shines is with the photographs.  Kelle is incredibly talented, her girls are beautiful and that helps Bloom appeal to people without children with disabilities.  People can easily glance through the photos and see that Kelle's life, and ours too, really isn't that different from anyone else's.

Recommended? Yes and no.  There are many, many people in the Down syndrome community who have read and fallen in love with this book.  Many seem to connect with the emotion in it, but I wasn't one of them.  I would read a sentence here and there are think YES!! I remember feeling that way.  But I wanted those moments of connection throughout the entire book, and I just didn't have that.

I think Kelle has managed to take away some of the fear surrounding Down syndrome with her photography, book and blog, and I appreciate that. Read this book for the photos.  As with any memoir, remember that this is Kelle's experience, not mine.