Review: The Red Queen by Philippa Gregory and *Giveaway* 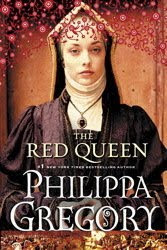 Heiress to the red rose of Lancaster, Margaret Beaufort never surrenders her belief that her house is the true ruler of England and that she has a great destiny before her. Her ambitions are disappointed when her sainted cousin Henry VI fails to recognize her as a kindred spirit, and she is even more dismayed when he sinks into madness. Her mother mocks her plans, revealing that Margaret will always be burdened with the reputation of her father, one of the most famously incompetent English commanders in France. But worst of all for Margaret is when she discovers that her mother is sending her to a loveless marriage in remote Wales.

Married to a man twice her age, quickly widowed, and a mother at only fourteen, Margaret is determined to turn her lonely life into a triumph. She sets her heart on putting her son on the throne of England regardless of the cost to herself, to England, and even to the little boy.


The Red Queen is the second book in The Cousins' War trilogy and while it covers roughly the same events as The White Queen, it is told from a very different perspective.  Margaret Beaufort claims to be a religious women and believes that it is God's will that her son rule England.  However, I found her words and her actions to be at odds with each other.  I didn't mind her scheming ways, in fact I expect that from people clawing their way to power, but it didn't lend any credibility to her assertion that she is following God's will.  She is vain, pompous and self-righteous.  In other words, terribly unlikable.

While I was not a fan of Margaret Beaufort, that didn't mean that the whole book was a bust.  I have only read a few of Philippa Gregory's books, but I've always enjoyed them  The pacing is, as usual, wonderful.  I never feel like I am being buried in information, but instead am able to follow the often confusing events easily.  I'm not an expert on the events of the time period though, so I can't say if they are accurate or not.

If you are new to historical fiction, or just new to the time period, I would recommend Gregory's books.  She has quite a knack for bringing history alive.  I didn't like The Red Queen quite as much as The White Queen, but that was primarily because Margaret was so infuriating.  I am still anxiously awaiting the final book in the trilogy.  3.5 stars

Thanks to the publisher I have 1 copy of The Red Queen to share with you.  This giveaway is open to US and Canada residents.  Entries will be taken through August 30th at midnight, with the winner announced on August 31st.  Please fill out the form below to enter.  While I'd still love your comments on the review, you must complete the form to be entered in the giveaway.

I've never read any of Philippa Gregory's work, but one of my neighbors keeps insisting that I must. Thanks for the giveaway.

This sounds like a good one. I did enjoy earlier books by her. Thanks 4 the giveaway Melissa.

I am hoping that this one is a better read for me than The White Queen was. That one didn't work for me for a lot of reasons. Thanks for the awesome giveaway!

I am reading this one right now.
I just posted this for you on win a book.

I like Gregory's work. I read The White Queen and liked it and although I've heard this one isn't as good I'd still like to read it.

My mom loves her books (and has me trying to get her this latest one).