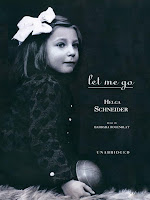 In 1941, in Berlin, Helga Schneider’s mother abandoned her along with her father and younger brother. Let Me Go recounts Helga’s final meeting with her ailing mother in a Vienna nursing home some sixty years after World War II, in which Helga confronts a nightmare: her mother’s lack of repentance about her past as a Nazi SS guard at concentration camps, including Auschwitz, where she was responsible for untold acts of torture. With spellbinding detail, Schneider recalls their conversation, evoking her own struggle between a daughter’s sense of obligation and the inescapable horror of her mother’s deeds.


I was recently browsing the library's audio downloads when this one caught my eye. I needed another book for my WWII challenge and I liked that Let Me Go looked like a quick listen at only 5 disks. Since the weather has turned cold and I'm not walking to work my audio listening has suffered and I find shorter books work a little better. What I didn't expect was the emotional impact those 5 disks carried...
Let Me Go is a snapshot of a story. There is a little background included in the form of flashbacks and stories, but the bulk of the story is one conversation. This may seem a little incomplete to some, but I thought the format worked well. Schneider didn't have much knowledge of her mother beyond this conversation and I liked that the reader/listener didn't know more than she did.
The narrator of this book, Barbara Rosenblat, is amazing. She inflects so much emotion into the book that I often found myself with goosebumps. When she reads the mother's words it varies between and old woman's confusion and petulance to unashamed cruelty. While Let Me Go is a fascinating story of an insider's experience in the concentration camps, it is worth listening to for the wonderful narration alone. 4.5 stars
Posted by Melissa at 7:26 AM

This sounds like an amazing listening experience. Off to go look for this one at the library now...

I'm always looking for WWII stories and this one looks like it is right up my alley.

Sold! I just ordered it from my library (although it only has four discs...weird). I've listened to Rosenblatt before on a Kathy Reichs audio. She is really amazing. I can't wait!

I'm pretty sure I've heard of this book before (though I don't remember where -- maybe the WW2 challenge?). It sounds like an intense read (or listen). I'll keep an eye out for it!

Oh yes, I read this book about 2 years ago. It was powerful.

BTW...I just noticed Lonesome Dove was one of your fav books. I just picked it up at a book sale. Looks like it will take forever to read..LOL

This looks like a great story! Thanks for the review!

We posted your review on War Through the Generations.

--Anna
Diary of an Eccentric