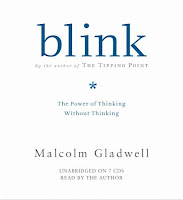 Book Info:
Blink: The Power of Thinking Without Thinking

How do we make decisions--good and bad--and why are some people so much better at it than others? Thats the question Malcolm Gladwell asks and answers in the follow-up to his huge bestseller, The Tipping Point. Utilizing case studies as diverse as speed dating, pop music, and the shooting of Amadou Diallo, Gladwell reveals that what we think of as decisions made in the blink of an eye are much more complicated than assumed. Drawing on cutting-edge neuroscience and psychology, he shows how the difference between good decision-making and bad has nothing to do with how much information we can process quickly, but on the few particular details on which we focus.
Leaping boldly from example to example, displaying all of the brilliance that made The Tipping Point a classic, Gladwell reveals how we can become better decision makers--in our homes, our offices, and in everyday life. The result is a book that is surprising and transforming. Never again will you think about thinking the same way.


I listened to Outliers (review) earlier this year and really enjoyed it. Blink was interesting, but I don't think it quite measured up to Outliers for me.
Blink discusses the snap judgements we make and what these judgments are influenced by. Some of Gladwell's examples were wonderful. He talked about how some people could tell a sculpture was a fake just from gut feelings. Or, how facial expressions tell the same story across different cultures, and how most cultures knew exactly what was being expressed.
Other examples didn't have me convinced though. His section on marriage was interesting. He talked about how a scientist could predict if your marriage would survive just based on a few minutes of video as you discuss an issue with your spouse. Sounds great, right? But this is hardly a snap judgment as these few minutes of video tape are heavily analyzed, frame by frame. To me, just because you study a small amount of data, doesn't make your findings the result of intuition.
I enjoyed Blink, but didn't find it as strong as Outliers. If you are a fan of Gladwell's, I think you will enjoy Blink, but I wasn't totally convinced by all his examples. 3 stars
Posted by Melissa at 7:23 AM